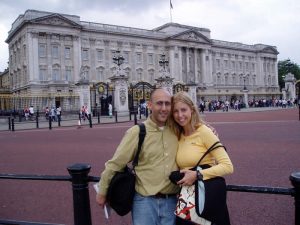 Melanie and I outside Buckingham Palace.

I was born and raised in London, England. My early childhood was dominated by a love for sport, particularly football (soccer), cross country, track & field and cricket. My early dreams were to be a professional athlete of some sort or a sports journalist. I headed off to the University of Birmingham where I completed a joint degree in Sport & Exercise Science and Sociology while running competitively (when not injured). While at Birmingham I began to develop an initial passion for outdoor adventure activities. However, running commitments prevented me from pursuing those interests to the full. After graduating I went through the typical traumas of not knowing what I wanted to do with my life. I spent a period of time working as a lifeguard, some time as a schools sports liaison officer, and then as a fraud officer for social services in London. It became apparent to me that I was never going to make Baywatch and the idea of a life of making people miserable by taking away what little they had did not appeal. I had always had a passion for working with children and decided I would go back and get my teaching certification.

I decided to leave England in February 1993 for 8 months to see the world before moving into teaching. I visited Thailand, Malaysia, Singapore, Australia, New Zealand, Canada and the US. While away, Dalhousie University in Nova Scotia, Canada offered me an academic and athletic scholarship. So when I returned to England I packed my bags again and headed off to a place I had never even seen before. I had 2 wonderful years in Halifax, completed my Masters degree under the guidance of one of my life mentors, Dr. Tony Richards, and was named an Atlantic University All Star Athlete in 1993, leading Dalhousie to their first AUAA title in 7 years. However just before the start of my second year I sustained a career ending injury running in Cape Breton. I took solace from one of Kurt Hahn’s (the founder of Outward Bound) famous quotes, “Your disability is your opportunity.” Running was replaced by an intense interest in outdoor education and recreation. I was part of several innovative youth initiatives in Halifax and left with a firm direction of where I wanted to go and what I wanted to do.

My next stop was to gain some more experience in the field. I traveled down to New Hampshire to work under the guidance of Dr. Dan Garvey and Anna Kay Vorsteg at Merrowvista Education Center who were recognized as two of the top people in the field. After a phenomenal year I decided to head further South to finish off my formal academic training at Texas A&M University. My time in Texas was mixed. I disliked it intensely at first but grew to really enjoy the South. I spent 5 years on and off in Texas as my time in College Station was punctuated by a variety of wonderful experiences. I came back to New Hampshire to direct an adventure camp program for one summer, I received a scholarship from the National Outdoor Leadership School (NOLS) to attend an Outdoor Educators Course in Wyoming for 1 month and spent 9 months in England working in a psychiatric setting. I also spent a year in Austin, Texas collecting data while working for their Parks & Recreation Department as a Roving Leader. This was a phenomenal experience where I developed some great relationships with families, kids and staff in East Austin. Finally, in August 2001 I graduated with my Ph.D. from Texas A&M under the guidance of Dr. Peter Witt, another wonderful mentor.

In August 2001 I moved to the University of New Hampshire. I spent a four and a half years there teaching some wonderful undergraduate students and working with some of the best colleagues one could have. In the summer of 2003 I was out west visiting some interns when I bumped into an attractive and intelligent first grade teacher (Melanie) from Baton Rouge, LA while seakayaing in the San Juan Islands. I persuaded her to move up to the cold and in July 2005 we got married in Boston. We then decided to visit Tanzania for our honeymoon, one of the countries I had most wanted to visit, and managed to climb Mt Kilimanjaro (5885 metres).

In May 2005, I was offered a position at North Carolina State University in Raleigh and moved down there in January 2006 in order to seek out some new challenges. In 2009, I was promoted to Associate Professor with tenure. 3 months later I became a US citizen at a ceremony in Southport, NC. In September 2009 I became a dad for the first time as my daughter Mia was born. So as you can see 2009 was a big year!! In 2012, we added another addition to our family, Liam. In 2015, I was honored to receive the Alumni Distinguished Undergraduate Professor Award, a testament to the great students I get to work with. In 2017, I was promoted to full professor which I can honestly say would not have been possible without the support of my colleagues who make this such a great place to work. I would say my life is shaped by my loves and passions which are: family and friends, my love for the outdoors, my work, traveling, and my love for making people laugh!!