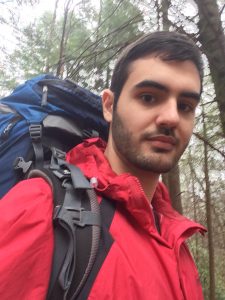 Thomas Barnes was born and raised in Charleston, South Carolina. He earned his undergraduate degree from Clemson University in 2019 majoring in Forestry, with a minor in Wildlife and Fisheries Biology. During his undergraduate studies he spent a year abroad at the University of Aberdeen in Scotland. Upon returning to the US, he began working with the American Chestnut Foundation assisting in the breeding program at Chestnut Return Farm. Thomas is now pursuing a Master’s of Science in Forestry here at NC State University. He aspires to assist organizations and landowners in forming or applying novel, ecologically minded treatments that can assist in ensuring the long-term sustainability and productivity of their forest lands. 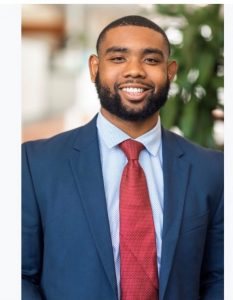 Austin Cary was born and raised in Memphis, Tennessee, where he spent most of his childhood outdoors. Growing up, Austin spent time every summer fishing and harvesting crops with his grandfather, and ultimately this is where his love and curiosity for nature began. Austin earned a Bachelor of Science degree from Tuskegee University. This past summer he interned with Resource Management Service (RMS) where he cruised timber, made logging contracts, and inspected silvicultural practices. He hopes to work in forest industry for his future career. 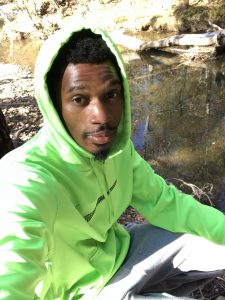 Tyrik Cooper was born and raised in Savannah,Ga. He completed his undergraduate studies at Shorter University, located in Rome, Ga majoring in biology and minoring in chemistry. During his years at Shorter, he was a pitcher for the University’s baseball team and served in the community working with disabled kids. Also during his undergraduate years, he was a veterinary technician for 2 years, before deciding to pursue a graduate degree dealing with the environment.
Tyrik originally attended Florida A&M University for 3 semesters before transferring to North Carolina State University. At FAMU, he represented the program at the International Conference on Heavy Metals and received a publication. Currently, his research involves growing industrial hemp in loblolly pine soils to study growth patterns and the effects it poses on fiber length. As far as hobbies, he love sports, exercising, motorcycles, skateboarding, snakes, and hikes. 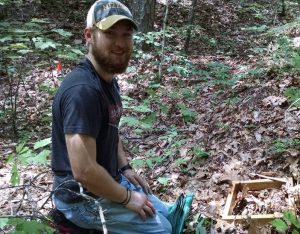 David is pursuing a Master of Science in Forestry in the Dr. Zakiya Leggett lab.  His research interests lie in the study of forest soils and how soil conditions influence forest growth.  More specifically, he is interested in (1) how soil nutrients influence forest establishment and early growth success; (2) how succession (the patterns of tree species distribution that shift with time after forest establishment) in low- to no-management forest systems influences the soil ecosystem and the inverse relationship; and (3) if short-term changes in forest floor (the surface plant litter layer) characteristics have lasting influences on underlying mineral soil quality/health in the context of disturbance.  In his work with the Leggett lab, David is investigating the effect of forest floor manipulation on the soil ecosystem and if these manipulations affect mid-lifespan growing success of trees in a pine plantation in the coastal plains of North Carolina. After graduating and while working in the private or public sector, he hopes to apply his experience in the fields of forestry and soil science to improve management decisions in a dynamic world. David earned a B.S. of Forestry from the University of Missouri in Columbia and is a native of St. Louis, Missouri. 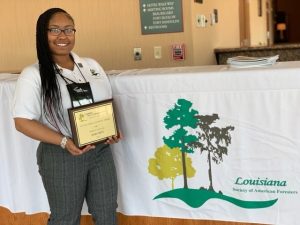 Asija Rice is from New Orleans, Louisiana. She completed her undergraduate studies at Southern University and A&M College majoring in Urban Forestry. During her years at Southern University, she served as President of the Society of American Foresters (SAF) chapter, Parliamentarian of the Minorities in Agriculture, Natural Resources and Related Sciences (MANRRS) chapter, Vice President of the Urban Forestry Club, and Vice President of the Student Leadership and Engagement Council. She also participated in the Big Buddy Mentor Program & Baton Roots in the Baton Rouge area. Because of her outstanding academic performance, she was awarded the 2018-2020 prestigious Louisiana Forestry Foundation Scholarship and the 2018 Thurgood Marshall College Fund (TMCF) Scholarship. Asija has interned with NRCS, participated in the USDA-National Institute for Food and Agriculture funded LSU EXPLORE internship and participated in Kansas State Research Extension (KSRE) Summer Research Fellowship program. 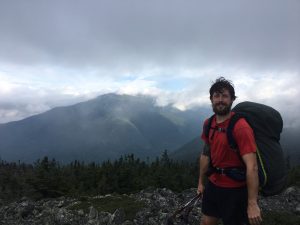 Tim Shively is working toward a Master of Science in Natural Resources.  He received a B.S. in Literature and Philosophy from the United States Military Academy at West Point in 2010 and served in various roles as an Army Infantry Officer for 8 years.  He has always been passionate about exploring and preserving our natural resources, and fulfilled a dream of thru-hiking the Appalachian Trail immediately after departing the military.  His thesis is focusing on how site and genetics may affect fine root dynamics in loblolly pine plantations.  He hopes to work in conservation and restoration in the face of human impacts and climate change. 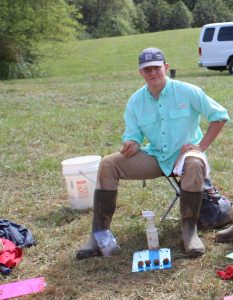 Jacob Burris is from the Blue Ridge Mountains in Grayson County, Virginia.  Being raised there he has established a love to natural resources and agriculture, especially soils.  He is currently working on his Bachelors in Natural Resources: Soil, Water, and Land Use with a concentration in Soil Science’s and a minor in Forest Management.  He hopes to continue on to graduate level studies and work towards a PhD in Soil Sciences.  Throughout Jacob’s academic career he has worked with many agricultural agencies, consultants, and committees to aid in his passion for helping agriculturalists and conservationists across Virginia and North Carolina.  Jacob is currently research hemp productivity in mountainous climatic regions, specifically in the Appalachians.  He is concentrating his research on the ability of hemp to be a productive commodity in the area while sustainability managing soil health and quality.  Jacob’s overall goal upon graduation is to become a Soil Scientist for a federal agency or work with an environmental consulting firm aiding landowners in agricultural and forest operations while maximizing their productivity from the ground up.

Rosemary Edberg is studying textile engineering at NC State. She grew up in Mora, Minnesota, where she lived on a farm and developed a passion for fibers and textiles while raising sheep. On campus, she is involved in NC State Stewards, the Krispy Kreme Challenge, and Textile Engineering Society. The summer after her first year at NC State, she worked with Dr. Leggett on a research project involving ecological literacy. After conducting a literary review and a survey of her own, she presented her findings at NC State’s Summer Undergraduate Research Symposium with a poster titled “Ecological Literacy: Does it vary based on where you’re from?” She hopes to work for the sports and outdoor industry in the future, creating innovative products out of sustainable materials. 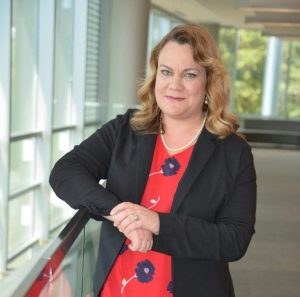 Alison Plumley is a former cosmetologist and entrepreneur whose love for the environment inspired her to return to school and become a scientist. Alison received her associates of science at Central Carolina Community College in 2018 and is on track to receive her bachelor’s in natural resources ecological assessment from North Carolina State University in the spring of 2021.

Despite being a non-traditional student with family responsibilities, Alison has made the most of her college experience by being actively engaged in her college community. Alison has served as a peer leader, helping to orient other college students to the college experience and has served in various capacities helping give back to others, including serving as an advocate for food and housing insecurity among college students. Alison is a member of the Phi Theta Kappa honor society and is an active member of TRIO support services where she has received the TRIO Trailblazer award and the TRIO Rising Achiever award for demonstrating exemplary leadership skills and the ability to show academic promise.

These attributes also led Alison to be chosen as a Ronald E. McNair Scholar, where she is currently taking steps to become a candidate for graduate school. As a Roland E. McNair scholar, Alison has completed undergraduate research on toxins known as PFC’s in drinking water and research in the utilization of land resources by experimenting with the cultivation of industrial hemp as a source of fiber alongside loblolly pine and is currently serving as a work-study student with the Department of Forestry and Natural Resources. Alison has presented her research as an alumnus at her local community college as a McNair Scholar at Colloquiums in Greensboro, NC, and Buffalo, NY, and she has presented at the  Society of American Foresters National event in Louisville, Kentucky as well as Regional Event in Norfolk Virginia. Alison is currently planning to study abroad this summer and to continue working on undergraduate research upon her return. 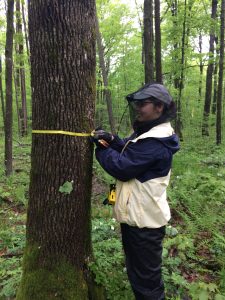 Kelsey’s interest and curiosity of the natural world began in Wisconsin, where she grew up surrounded by northern hardwood forests and the Great Lakes. Combining this interest in nature with her passion for science, she graduated from the University of Wisconsin Madison with a B.S. in Environmental Sciences and a certificate in Sustainability. As an undergrad, she was able to work in the Flambeau Experiment, which is a long-term study that manipulated a second-growth forest with old-growth forest characteristics like group selection harvests and woody debris additions. This grew her curiosity about forest ecosystems even more, and with her eyes set on a future in forest ecosystem health and sustainable management, she completed her M.S. in Forestry and is now working as a research scientist with USDA in Raleigh, NC. 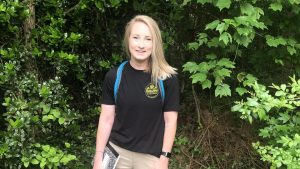 Lauren Lintz is from Florence SC and received her bachelors in Environmental Science at Winthrop University before coming to NC State for her Masters of Natural Resources. She has a passion for everything outdoors, including hiking and ropes courses. She is currently working with the Department of Health and Environmental Control in Greenville, SC.